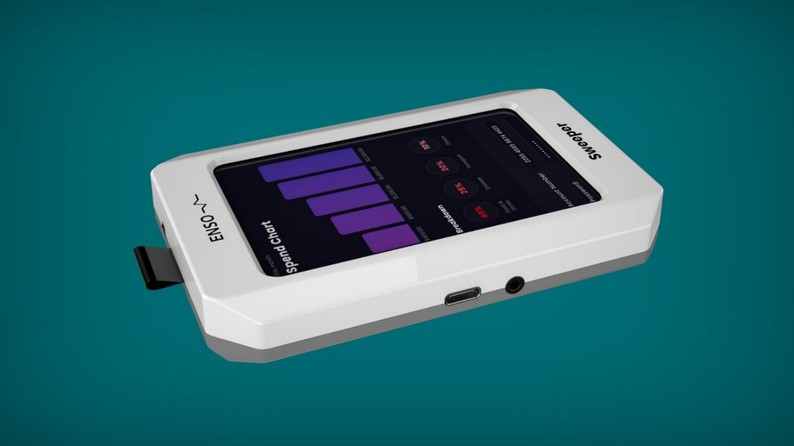 Enso Electronics has announced to us that their very successful Parasite Sweeper has been updated with a modern touch screen interface and USB-C quick charging. As a result, the Sweeper Plus has been discontinued and is out of stock permanently as of April 25th , 2022. The new Sweeper CT is anticipated to ship July 2022.

According to Enso, there have been delays in the supply of electronic components due to the lock downs which have interrupted and caused shortages of components. In addition, the situation in Ukraine has also resulted in delays as some of the components for the sweeper are made there. Pricing on the new sweeper has not been announced yet. What follows below is a presentation we received from Enso Electronics for this new device. It has been corrected for translation errors as the original
source language is Polish.

2 THE INTENDED USE OF THE DEVICE
• removing defects
• detoxification of the organism
• therapeutic programs (analgesic, regenerating, dedicated to particular ailments)
• stimulation of the defense capacity of the organism
• stabilization of the nervous system (in the case of mental disorders – for instance
stress, insomnia and depression).

3 THE MOST IMPORTANT QUALITIES OF THE DEVICE
In its basic version, the Sweeper comes available with approximately 400 essential programs recorded on an SD which is part of the device. The capacities of this product are significantly extended by a computer program attached to the set, in which there are more 3,500 additional programs, representing such categories as: ‛Therapeutic‛; ‛Sets of programs‛, ‛Anti-parasitic‛, and also ‛My programs‛, and there exists the possibility of recording them on the device. The device collaborates with an electrode-exit (for the purpose of a frequency-resonance therapy) with the range having the maximum value which amounts to 3 million Hz, and also a loop-exit (a pulsating magnetic field) with the scope having the maximum value which amounts to 25 thousands Hz.

The above-mentioned capacities can be used separately, or to conduct therapies taking advantage of both of the capacities simultaneously, depending on the needs, and also
on the expected results.

An inductive loop is perfectly suitable for application, and it also facilitates using the device, particularly, while working with children. As well as that, the Sweeper offers the possibility of generating frequencies manually, and creating original programs, customized with personal needs in mind, which makes it possible for therapists, and also for customers, not to confine themselves to meeting standard needs.

THERAPY
21 days, 20 minutes on each program (pathogen for ex. human worm) – try to use both the loop + electrodes as it has a stronger effect. You can use also only electrodes or only loop.

Electricity does not penetrate bones or cysts where anaerobic pathogens can exist. The induction loop does penetrates the body including bones and cysts.

THE SET IS COMPOSED OF: